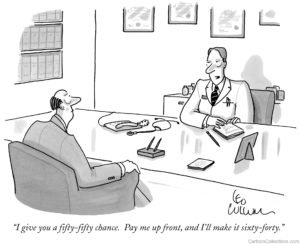 The trouble with becoming great at an instrument, is that by the time you do, you’ve forgotten the steps you took to get there.

Sometimes in my internet wanderings I visit the sites of other people or companies offering online piano lessons. Without exception, advertisements are based on two things: what credentials the teachers have, and how many songs they’ll teach you.

The problem with the first thing is that the achievements of a teacher don’t transfer to students. If they did, every conservatory grad would be sitting high on the hog and you’d have neighbors who are concert pianists. But they’re not and you probably don’t.

The problem with the second approach is that learning individual pieces isn’t going to be useful unless you’re also learning to understand musical context and usable patterns. We all know grownups who took years of lessons as kids and have Twinkle, Twinkle to show for it. (And if that’s you, it’s OK! It’s never too late to learn for real.)

Learning individual pieces is teaching to the test. The test being the annual recital. But that alone isn’t helpful! I passed tests in my Spanish and German classes when I was in school. I learned to speak some sentences in Spanish and German but now I can’t order pizza in either.

So yes, pay me if you or your child wants to learn piano. But don’t do it because I’m great. Do it because YOU’RE great and you deserve a teacher who understands how your wonderful brain and body work to learn music.

I’ll put it another way: Don’t pick a teacher because they have a degree from Eastman. Do it because they’ve gone back and studied the steps we all take to learn music, so they can help you, too.

I might still be great, though; I do have a degree from Eastman, after all! 😉

This site uses Akismet to reduce spam. Learn how your comment data is processed.